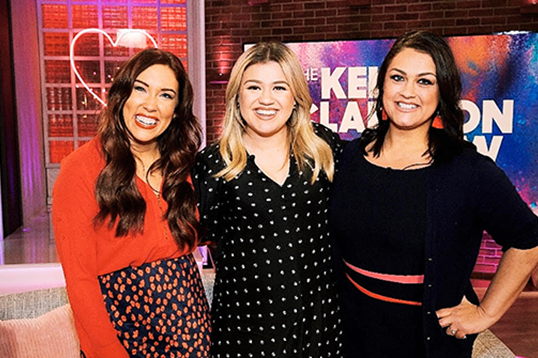 Alumna's work as an educator lands her on The Kelly Clarkson show February 26, 2020

As an interventional specialist for an alternative high school in Columbus, Ohio, Kristen Meunster serves some of the city's toughest neighborhoods.

Kristen Muenster serves some of Columbus, Ohio’s toughest neighborhoods as an intervention specialist at the Academy for Urban Scholars, a dropout recovery school in the heart of the city. Her students hail from hardscrabble homes, beset with a number of challenges – ranging from poverty to homelessness to food insecurity, but Kristen says they’re not unlike any other kid.

“Once you peel back the layers of the hardness…they are true kids and they want just as much out of life as anyone else,” she said.

“They have hopes. They have dreams. They didn’t ask be in these crappy situations where they come from.”

Kristen knows that she can’t fully relate to their backgrounds having grown up in Gates Mills, Ohio, a world away from Columbus’ rough urban streets, but she does know how it feels to struggle academically and that fuels her drive to want to see her students succeed.

“I know I don’t look like you. I don’t know what you go through,” she tells her students.

“But I can tell you how I felt when I was at school and I hated it, and I can help you not have that feeling.”

She fumbled her way through reading and math in elementary school, getting extra support and guidance at mobile units outside the school. She says it took years of hard work to finally grasp the material that she would one day have to teach to students with similar academic challenges.

Kristen’s dedication recently won her a seat next to Kelly Clarkson on the entertainer’s eponymous talk show, where she was ultimately surprised with a classroom makeover by a former Columbus teacher turned interior designer.

Having visited some of her student’s homes, she wanted them to have a warm, inviting and safe space while they were at school. She says the new room has sparked greater productivity and pride.

“They’re very territorial of the room, which is nice,” she said, adding that the quality of work that they’re producing has skyrocketed.

Kristen didn’t set out to teach this particular demographic, but her student teaching experience at the University of Mount Union steered her down a path wholly different from her peers. By the time she enrolled at Cleveland State to get her master’s in curriculum and instruction, her plans were solidified.

It’s been ten years at the Academy for Urban Scholars and despite the challenges, what anchors her is the glimmer in her students eyes that yearn for a life beyond what they’ve known.

“Ninety percent of the [student] population will be the first person to graduate [from high school], let alone go to college.”