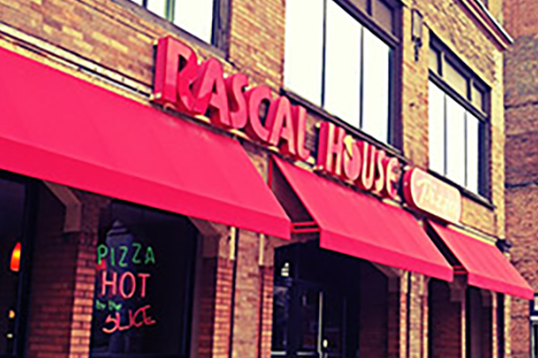 Ask anyone who was a CSU student in the 80s, 90s and early 00s, and they’ll tell you that Rascal House was a campus institution.

When Rascal House opened in 1980 at the corner of Euclid Avenue and East 21st street in what used to be a Dairy Queen, it quickly became a campus favorite. Just two years later, Cleveland State students had it named the “Best Off-Campus Eatery.” And then, four years later when the CSU men’s basketball team reached the NCAA Sweet 16, the Plain Dealer dubbed it “Cleveland’s Best Pizza.”

Ask anyone who was a CSU student in the 80s, 90s and early 00s, and they’ll tell you that it was a campus institution, a place for study sessions, booze-filled late nights after concerts at Peabody’s Down Under and gorge fests on the cheesy, doughy pizza. For some international students, it was the first time they’d ever eaten pizza.

“Man, I spent a lot of book sale money there!” Carla Wainwright said, commenting on a Rascal House post on the CSU Alumni Association's Facebook page.

“You never got much for used books, but it was a win if you got enough for a beer and a slice!”

In 2013, the University bought the site of the original location to make way for the Center for Innovation in Medical Professions, providing nearly $2 million so owner and founder Mike Frangos could renovate the pizza shop’s new and current location, just a few blocks west in the Union Building.

Still, that original building serves as an anchor point for many CSU alumni, hearkening back to a place, though long gone, filled with memories.

“I remember when it was a Dairy Queen in the late 1970s before it transitioned into Rascal House. A great place to meet up with friends after class (and instead of class),” Rob Dean commented, tagging a former classmate Kim Sliwinski.

“Much too often,” she replied. “Yet…we all still graduated.”