Leading to Make a Difference 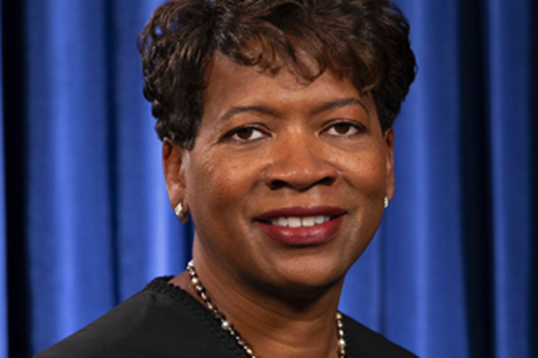 What does leadership look like to you? That’s the question Cleveland-Marshall College of Law alumna Justice Melody J. Stewart posed in her virtual episode of the Women’s Leadership Lunch Series.

As the 161st justice and first African-American woman elected to the Ohio Supreme Court, Stewart has her own thoughts on which qualities make an effective leader, but she’s more interested in what others think.

Stewart calls herself a servant leader, or one who serves others while achieving goals. To be seen as an effective leader, Stewart seeks to keep learning, listen more than she talks, understand other people’s perspectives, and follow the Platinum Rule to treat others the way they want to be treated.

“I will lead by example in doing something for the better good of society or for the better good of another group of people or for the good of another individual,” said Stewart. “My job, my responsibility as a statewide elected official is to do the absolute best that I can in my position at the Supreme Court for the good of every person and entity in this state.”

When she was campaigning for Supreme Court, she tried to visit each of Ohio’s 88 counties. People cautioned her that she wouldn’t be welcomed everywhere, but she wasn’t deterred because she seeks to find common ground.

“My assumption is, ‘I am going to be treated with respect, and that people are going to listen to me’…. I walk into every situation like that unless somebody proves me wrong and shows me otherwise.”

Born and raised in Cleveland’s Hough neighborhood by a single mother, Stewart grew up when African-American women predominantly had blue-collar jobs. She didn’t envision the future she has built for herself until years later.

“My being on the Supreme Court wasn’t even in the realm of possibility for my life,” said Stewart.

She said she probably didn’t even know what the Supreme Court was until law school at CSU’s Cleveland-Marshall College of Law. That’s why her advice to high school and college students is not to feel pressure about the future.

Stewart learned to embrace this evolution firsthand and listen when others see her potential and open new doors open for her. During her high school years at Beaumont, a teacher encouraged her to run for student council vice president. Instead, she aimed higher and was elected the school’s first African-American student council president. During college, she only wanted to study music, so she studied classical piano and earned a Bachelor of Music degree from the University of Cincinnati’s College-Conservatory of Music. After college, she got a job in the healthcare industry, where the vice president was in law school. Stewart looked through his law books, found them interesting, and applied to law school on a whim. During law school at CSU, her legal writing professor gave her the opportunity to be an adjunct instructor. In 2006, she was elected as a judge on the Eighth District Court of Appeals.

“I’m a classic example of still trying to figure out what I want to be when I grow up,” she said. “In the meantime, I have had these wonderful opportunities and this meaningful work life and this meaningful life experience, and I wouldn’t trade it for anything in the world. I am blessed by the opportunity to make a difference in people’s lives.”

Watch the replay of the event below.