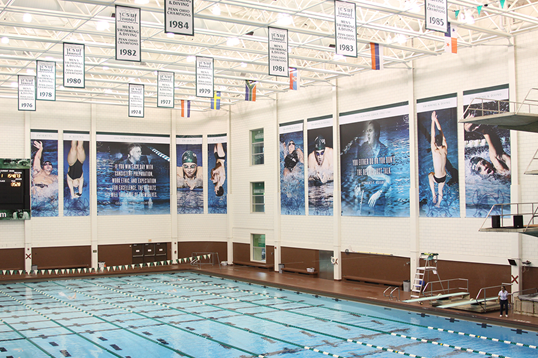 Since 1973, Robert F. Busbey Natatorium has been considered one of the elite swimming facilities in the nation, enjoying a rich history of championships and outstanding swimmers.

Now, thanks to generous alumni and friends, the natatorium has a spectacular new look with much-needed enhancements ensuring continued success for CSU’s swimming and diving program.

Fresh paint and a new filtration system, made possible through the efforts of President Ronald M. Berkman and Athletics Director John
Parry, added to the natatorium’s improved look.

“The idea behind the Champions Campaign was simple: bring the Robert F. Busbey Natatorium back into championship form and cement, literally and figuratively, nine decades of swimming and diving heritage,” says Stockwell. “Thanks to phenomenal support from swimming and diving alumni, the natatorium looks newer today than when it was built 40 years ago.”

Phase Two, the Heritage Project, exceeded its $75,000 goal and added a wow factor to the facility. New features include:

“The Heritage Project is more than eye-popping graphics,” notes Guinther, who chaired the project committee. “What started as an effort to rally our teammates in support of much-needed pool improvements evolved into a platform for recruiting, fundraising and connecting. This project underscores Swimming and Diving as a relevant and essential program for the present and future.”