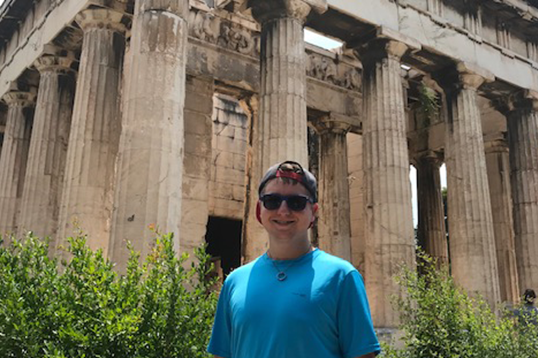 Senior Marty Barnard didn't know that when his fraternity selected him for a trip to Greece this summer, his life would change forever.

Sitting at The Parthenon, overlooking the city of Athens, Greece, CSU senior Marty Barnard couldn’t help but wonder: “How am I here?” It’s a place his once timid freshman self would never have imagined that he’d ever step foot.

But over the past three years, Marty has undergone the sort of transformation that college is supposed to initiate. And there he was – the summer before his senior year – perched atop the Athenian Acropolis in the famed ancient temple reflecting on what it all meant.

He was there as part of his fraternity Sigma Phi Epsilon’s coveted Tragos Quest to Greece, just one of 16 brothers selected for the all-expenses paid, ten-day journey exploring the Peloponnisos peninsula in Greece. It is one of the highest honors in SigEp.

“It’s going on three months since my trip, and I’m still learning more about myself,” Marty said.

That’s because the Quest was designed to spark deep introspection, and Marty’s need to uncover whys and hows of life is the intended effect.

For ten intense days, Marty said that he was thrust into deep soul-searching work with 16 strangers, albeit fraternity brothers.

They’d travel from Athens to Delphi to Corinth, never staying put longer than one night, explore the ancient ruins of Greece with native travel guides, and head back to a hotel for dinner and discussion about how history connects with now, how our backgrounds shape us, how our foundations can chart our paths in life.

The brothers typically spent hours talking. Marty says that was his favorite part of the trip.

“People were so willing to open up,” he said. They’d talk about addiction, depression, insecurity and fear. It was the sort of vulnerability that formed close bonds.

“Those 16 people became a quick family.”

Even months later, in group texts, the group is sharing “aha” moments that the Quest stirred in them, moments that are still happening for Marty too, like how he’s less inclined to doubt himself, opting for embracing his strengths.

“It instilled a new perspective…,” he said.

Entering the last year of his undergraduate career, Marty is eager to use the lessons learned to become a more grounded leader and share his insights in the hopes of cultivating other fraternity brothers’ leadership instincts.

“We’re going to be talking about this for a long time.”