So Much More than Peanuts and Cracker Jack

The feeling of excitement around Cleveland’s athletic teams (almost all of them) is bringing enormous pride and energy to the community. The CAVS championship trophy was recently on display at the CSU Student Center and the line of students, faculty, and staff taking selfies with the trophy wrapped around the lobby and was a sight to see. Our staff joined in the fun and struck a pose as well.

The Cleveland Monsters returned to play and hoisted their Calder Cup Championship flag, while the Tribe is up 3-0 against Toronto.  The energy around the city is contagious. “Let’s go Cleveland!”

Along with our athletic stars, we recently paid tribute to some CSU stars.  At the 26th annual Distinguished Alumni Awards on September 30, we honored 10 alumni with awards recognizing their achievements and contributions to society.  In addition to presenting each honoree with a plaque, we shared videos of each sharing their CSU story and their journeys beyond campus over the years.  The videos are available for all alumni to watch here. What stood out most for me was the humble beginning each honoree had and what they accomplished with grit, determination, and incredible passion. Their stories are marvelous, as are they.

In addition to alumni superstars, we have so many students on campus who are achieving in and beyond the classroom, who also share in humble upbringings while overcoming adversity.  The upcoming Cleveland State Magazine will feature a handful of these students.  I encourage you to read their profiles and learn more about the students following in your footsteps — you can’t help but be proud. The magazine will be mailed in the coming weeks. Let us know what you think.

In the meantime, “Let’s go Cleveland!” 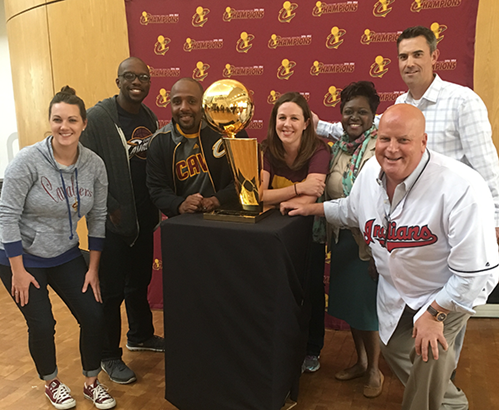