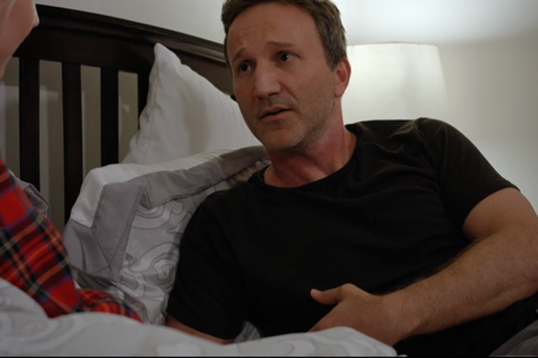 “Does that world that I lived in [as a child], does it exist anymore?” he said.

“Is there any way to get it back?”

His new dramedy, The Enormity of Life, filmed in Cleveland and Northeast Ohio, is an ode to days gone by.

A middle-aged man, played by Breckin Meyer (Good Girls, Clueless, Franklin and Bash), teetering close to the brink of suicide meets a young woman (Emily Kinney, The Walking Dead) and her eccentric daughter (Giselle Eisenberg, Life in Pieces). Together, they embark on a journey to discover joy anew.

“[The movie is] a tough one peg, which is why I think it took as long as it did to get distribution,” he said.

“I don’t know that every distributor knew how to market it.”

The Enormity of Life is a follow-up to Made in Cleveland in 2013, Swinderman’s anthology about the pursuit of happiness in Cleveland, and tackles weighty issues like mental illness, gun violence, along with suicide.

So far, the response has been positive.

“We ‘re hearing people say: ‘It started a conversation with my daughter….I was thinking about this movie for days….This movie tackled mental health in a real and responsible way,’” he said.

“Those are the things we’re proud of.”

Swinderman wrote the screenplay nearly six years ago, on a break from filmmaking, but doesn’t plan on slowing down soon. Along with The Enormity of Life star Emily Kinney, he’s currently developing a series for a streaming service.

The Enormity of Life is available to rent on Amazon Prime Video, Apple TV, YouTube and Google Play.