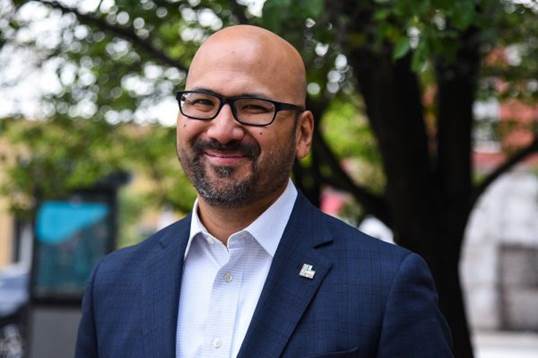 Forty-five alumni were recognized by Cleveland Magazine as top influential leaders on its 2022 Cleveland 500 list.

Forty-five CSU alumni were named to Cleveland Magazine's 2022 Cleveland 500. A list of the most influential people in the community, the Cleveland 500 recognizes these alumni for their leadership and success. The list includes an array of individuals from the business, professional, education, entertainment and technology sectors whose strong leadership is reflected in their achievements and impacts on the community.

“The success of our graduates is a testament to the quality education that students are receiving at Cleveland State University,” said Anne-Marie Connors, Associate Vice President of Alumni Relations and Corporate Engagement and Executive Director of CSU’s Alumni Association. “Cleveland State is clearly a foundation in driving the economy of Cleveland as exemplified by all of these leaders recognized here. We are so proud of the accomplishments of all of our graduates.”

-       Ahuja launched Transtar Industries, growing it into the leading U.S. company in the distribution of automotive transmission replacement parts to the aftermarket.

-      Einhouse has worked closely with staff and board of directors to stabilize the finances and grow visibility for Beck Center for the Arts since 2007.

-      Falcone-Hall was named CEO in 2014 and since then has worked to make the society more accessible to Northeast Ohio residents.

-      Freeh joined the national general contractor in 1983 and actively develops and monitors strategies for ensuring the company’s long-term financial viability.

-      Friedman is a founding partner of Friedman & Nemecek. In addition to his practice, he’s also an adjunct professor at the CSU Cleveland-Marshall College of Law where he teaches cybercrime.

-      Gallucci is responsible for transportation planning and resource allocation for the Northeast Ohio Areawide Coordinating Agency. In 2016, she received a Distinguished Alumni Award from CSU’s Levin College of Urban Affairs.

-      Gevry has been the CEO and CIO of Boyd Watterson since 2006. Prior to becoming CEO, he was the chief operating officer.

-      Gibbons is the founder of Brown Gibbons Lang & Company and serves as senior managing director and a member of the executive committee.

-      Gilbert and his team helped plan and prepare Cleveland for the 2021 NFL Draft. He also serves on the board of the International Children’s Games, Rock & Roll Hall of Fame and numerous other local organizations.

-      Gilbert has represented clients in many high-profile criminal defense and civil rights cases for over four decades.He’s appeared on NBC’s “The Today Show” and CBS News, as well as in many documentaries.

-      Habat has led an uptick in the number of houses the organization builds yearly. He announced that he will retire later in 2022.

-      Jochum has been passionately engaged in the fight for LGBTQ+ equality at the local, state, national, and international level for more than a decade.

-      Johnson is also co-founder of Soul of Philanthropy Cleveland, which gave way to the Cleveland Black Equity & Humanity Fund managed by the United Black Fund of Greater Cleveland.

-      Prior to becoming general manager, Jones led the firm's Special Projects Division, launching its new service line that grew to a $50M operation in the five years under his guidance.

-      Larkin was director of The Plain Dealer’s editorial page and now writes columns for Cleveland.com.

-      Lash has more than 30 years of experience in the accounting industry. He started his career at Walthall CPAs and was part of the 2017 merger with Rea.

-      McShepard is responsible for managing and evaluating leadership development, succession planning and executive training across RPM.

-      Menesse is the CEO & president of Cleveland Neighborhood Progress and promotes its mission to foster neighborhoods of choice and opportunity.

-      Since joining The Jacobs Group in 1978, Miller has directed development, sales and lease transactions exceeding $1 billion in value.

-      Moore-Hardy is a fellow in the American College of Healthcare Executives, a member of the American Hospital Association and holds numerous titles from local and national organizations for her work in health care.

-      Neuman is director and president of Barnes Wendling CPAs with over 30 years of experience working with clients.

-      Obrenski is the second woman to serve as president in the union's 86-year history.

-      Prosecutor Michael O’Malley took office on January 3, 2017, with a plan to restore the public’s confidence in the justice system.

-      Osiecki was appointed CEO in 2018 and has been employed with the Board in executive leadership capacities for nearly 26 years.

-      With over 25 years of real estate and construction experience, Otero is founder and president of Otero Signature Homes.

-      Pease is a member of the American Institute of CPAs and the Ohio Society of CPAs. At 29, he was the youngest chairman of the Tax Division of CPAmerica, Inc.

-      As KJK’s managing partner, Pinney leads the firm’s experienced team of attorneys and staff in serving a wide array of clients.

-      In 2016, Ricci received a Distinguished Alumni Award. A 35-year aviation industry veteran and pilot, he flew Bill Clinton when he ran for president in 1992.

-      Ruiz works to improve the academic achievement of the Hispanic community in Greater Cleveland and prepare students for college.

-      Since founding his company in 1955, he has expanded its portfolio of apartment developments to more than 275 multifamily residential communities.

-      Stanek has served as chief financial officer of the Berea company since 1996.

-      Stickan is the first woman to serve as Cuyahoga County Republican party leader.

-      Torok was CEO of PreEmptive Solutions. He recently sold it and now serves as CEO of Budah LLC and is on the Greater Cleveland Partnership Board.

-      Trzcinski was also the one-time president and COO of two of the nation’s most well-known mattress brands, Sealy and Stearns Foster.

-      Vernaci will step down as CEO in 2023 after having successfully grown the institution's reputation during her nearly 40-year tenure.

-      Williams was the City of Cleveland’s 40th Chief of Police, appointed to the Division of Police in February 1986.