How three alumni plan to revolutionize the mortgage lending industry 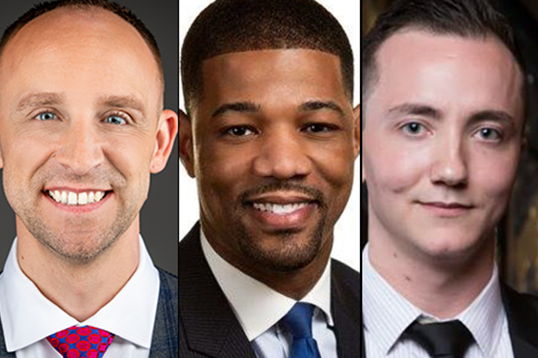 Brian was the first to quit his job. Then Gusty. Then Michael.

“We just sat there in silence for about 60 seconds,” Brian said.

The three had recently secured office space above Nano Brew, a popular restaurant in Cleveland’s trendy Ohio City neighborhood. And after months of talking, planning and strategizing, this day — March 1, 2021 — was the point of no return. They were officially branching out and resigning from their cushy, high-profile jobs in the banking and mortgage industries.

Brian Lewis was a vice president, Gusty Molnar an executive director, and Michael Hudson was a regional vice president at their respective companies.

“Emotionally, it was a crazy roller coaster…I was freaking out, “ Michael said.

“But we made the decision that we were going to do it.”

With 50 years of combined experience, the three, who met and became friends while working at the Cleveland office of Quicken Loans (now Rocket Mortgage) in 2008, were launching Social Mortgage, a mortgage brokerage that they hope will provide a markedly different experience from big box lenders.

It was an idea born from years of observing how the pre-approval and lending process was, in certain respects, amiss. Gusty called those issues broken windows.

“You can replace the [window] pane or you could take out the whole thing, but there are solutions to fix that broken window,” he said.

Social Mortgage has a number of solutions, in fact.

First, the three (all co-owners) are working to demystify the lending process.

Brian noted that for many, particularly among certain demographics, the thought of owning a home seems a far-flung ambition. In reality, the prospect isn’t as inaccessible as it appears, so the trio works to educate would-be homeowners and clear up misconceptions.

The partners are also focused on giving clients a level of personal attention uncommon in traditional relationships with mortgage bankers.

“We work with people from start to finish to close out their loans, while other lenders have assembly line processes, where you talk to one person then another then another,” Michael said.

“At our company, you’re going to have two people: me and the closer, who show up at your house to sign the [closing] paperwork.”

And then there’s Cleveland. The three have a commitment to the city.

“We’re focused first on Cleveland. On growing jobs here for folks that may or may not have had that opportunity put in front of them,” Gusty said.

Social Mortgage invests in marginalized demographics by employing and equipping a diverse group of brokers who are reflective of the populations they serve.

Likewise, Brian, Gusty and Michael are also dedicated to serving an inclusive base of potential clients.

At almost a year in, and despite that initial trepidation, the three are fully confident that they made the right choice to start the company. They’re relying on skill sets and knowledge that have been sharpened and refined for over a decade. Now, they’re applying that acumen in a way that, in some respects, could be considered social activism.

“I’m helping people that — normally, at least when I worked at a larger company — might have been marginalized,” Michael said.