CSU alumni join a who's who in publication's annual recognition program 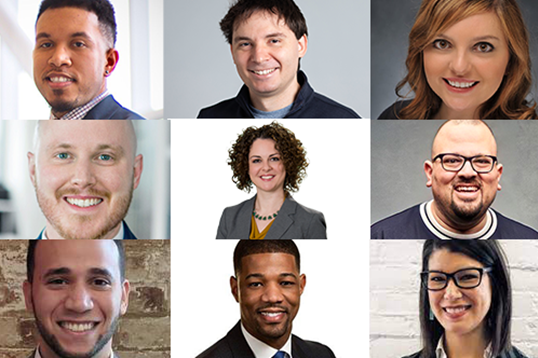 CSU alumni join a who's who in publication's annual recognition program November 23, 2021

We talk a lot about how CSU and our alumni influence the region. For proof of that, look no further than this year's Crain's Cleveland Forty Under 40.

Crain’s Cleveland recently unveiled its Forty Under 40 class of 2021 and a quarter of the list comprises alumni, one soon-to-be alumna and one university staff member. But that’s not anything new. CSU alumni and staff have routinely appeared on the list, now in its 30th year. And it underscores what we’ve been saying all along: CSU has a profound impact on Northeast Ohio.

Indeed, one honoree is working on creating the “operating room of the future.” And another was recently named manager of Cleveland Mayor-elect Justin Bibb’s transition team.

Meet all of them below.

Cynthia Connolly (MPA ’11)
As a member of the Little Traverse Bay Bands of Odawa Indians, she’s worked for years to advocate for native and indigenous communities. Even her work as director of programming for The City Club of Cleveland allows her the chance to amplify those indigenous voices that are often overlooked.

Bradford Davy (MUS ’14)
Davy’s knack for connecting both people and ideas will serve him well as manager of Cleveland Mayor-elect Justin Bibb’s transition team. With this new role, he leaves his previous post as director of regional engagement with The Fund for Our Economic Future, a consortium of foundations, higher education institutions, corporations, government institutions and civic associations.

Cathryn Greenwald (MA '09, JD '09)
Her vast experience helped expand the Cleveland law firm Thompson Hine’s real estate lender representation platform and earned her a spot as partner. In addition, Greenwald is a board member for CHN Housing Partners and is chair of the Cleveland chapter of the Urban Land Institute.

Tom Haren (JD ’11)
One person said that Haren is so accomplished, so early in his career that the road ahead for him knows no bounds. He’s already an authority in the field of cannabis law and helped his firm Frantz Ward, where he’s also partner, grow its cannabis law practice.

Omar Kurdi (BA ’13)
Kurdi is carrying his father’s legacy forward as CEO of Friends for Life Rehabilitation Services, an organization for adults with development disabilities. He’s the sort of leader others should emulate, said one of the agency’s directors. When COVID shuttered business for three months, Kurdi ensured that all employees would remain on payroll and even today, he’s a helping hand for anyone who’s fallen on hard times.

Brian Lewis (BBA ’07)
Lewis founded a new mortgage banking company with two other Cleveland State grads. Having left a high-powered position at Merrill Lynch, he hopes the focus of his work now will empower a new generation with financial literacy and opportunity.

Allison Lukacsy-Love (expected MUS '22)
Allison’s work as director of the department of planning and development for the City of Euclid has transformed the city’s shoreline into what is now a popular park for both residents and visitors.

Eugene Malinskiy (MS ’12)
An accident that Malinskiy witnessed during a medical procedure inspired him to found a company with an eye on creating “the operating room of the future.” Having already secured $18 million in funding, the serial entrepreneur is prepping his first product — a wireless arthroscope — for the market.

Delante Thomas (JD '16, MLRHR '16)
Thomas is a whirlwind. Armed with two degrees from Syracuse University and one from Cleveland State and another from CSU Cleveland-Marshall College of Law, he run his own private practice, serves as a part-time ethics trainer for Cuyahoga County and is the director of the JD Advantage program at Case Western Reserve University.