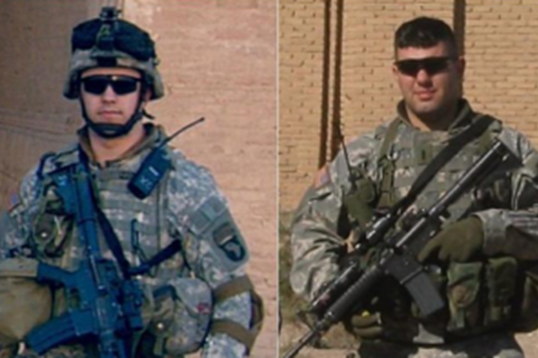 CSU professor Patrick McGinty shares how his podcast, What We Brought Home, provides a cathartic experience for veterans to share their stories.

Though Patrick McGinty and his friend Mike Izzo have known each other for over 20 years, they went the majority of that time without talking about a particularly harrowing year they both experienced back in 2005 when they were both deployed to Iraq.

“In 2019, we were visiting each other and during conversation we both happened to mention the desire to develop a creative outlet to express some of the complicated feelings we have about our military service. We realized we have been close friends for a long time, yet we knew almost nothing about each other’s experiences in the military, even when we were stationed together at Fort Campbell,” said McGinty, an assistant professor in the department of Health Sciences.

This realization led to the creation of the “What We Brought Home” Podcast.

“Through our own personal work on mental health and wellbeing, we had both come to similar conclusions about the importance of sharing experiences to promote healing and understanding. So, we decided to start a podcast with the explicit intent to give veterans a safe space to share their often conflicting emotions about military service as well as bridge the gap in understanding between the civilian and veteran community.”

The podcast is centered on the belief that a healing experience occurs when you open up to others and share experiences that may have had significant or traumatic impacts on your life.

Each episode features a veteran who anonymously shares his story.

One of the podcast’s first guests was an army veteran from the Iraq war. A Stryker infantry platoon leader, he was in charge of about 45 infantry soldiers and 4 Stryker vehicles, and he shared his experience of being hit by a roadside bomb while on a patrol.

“Being able to share these experiences anonymously through the format of our podcast allows for an added level of comfort and freedom to express the wide range of emotions and thoughts our veterans come home with. We strive to create a safe, nonjudgmental atmosphere of understanding, no matter the traumatic experience being recounted.”

“Too many veterans feel alone or lost in their feelings regarding their military service. This is directly related to the mental health and suicide crisis afflicting veterans. Being able to share allows others to see that there are many veterans having the same complicated emotions,” said McGinty.

“There has currently been twenty years of war that has not affected most of our population. Most civilian understanding of war comes from the Hollywood version.”

“Our belief is that through sharing these stories, civilian listeners will have greater understanding of the veteran population and bridge the gap that often leaves veterans feeling lost. We also hope listeners will learn to advocate for support of veterans as they acclimatize back into the civilian world.”

Ultimately, McGinty and Izzo hope to connect with as many veterans as possible and grow a wider listening audience in order to promote healing and understanding on the journey to bridge the divide between civilian and veteran experience.

“Mike and I both feel very privileged to have this opportunity to sit down and really listen to veterans. It is rewarding beyond words.”

The first season of “What We Brought Home” is available for listening on Apple Podcast, Spotify, Breaker, and Google Podcasts. McGinty and Izzo are working on season 2 and hope to have it published in early 2022.

Visit www.whatwebroughthome.com for more info on how to listen or become involved.