This alumnus served his country with the beat of a drum 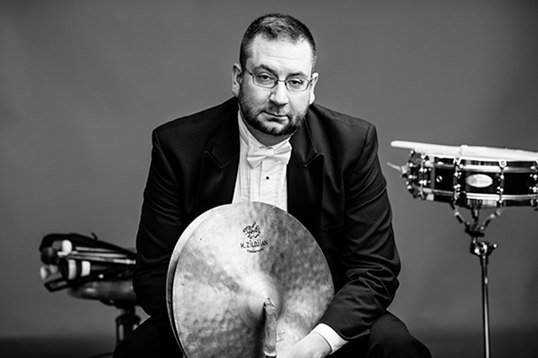 This alumnus served his country with the beat of a drum November 11, 2022

At times, Jerry Noble (BM ’97) thought playing in a US military band didn't count as much as the service of other soldiers. He's since learned quite the opposite.

The history of military bands extends as far back as at least the Ottoman Empire in the 13th century. That is, at least, the first recorded instance.

Through the years and across the globe, history recounts how drummers walked in lockstep onto the battlefield with soldiers, unloading and loading their weapons to each beat. Bands served to lift the spirits of weary fighters and even signaled moves critical to mount winning military campaigns.

But while today’s bands in the United States aren’t on the frontlines, their significance is no less than it was when they were. And a few CSU alumni have earned coveted spots within their ranks.

Jerry’s originally from the Cleveland area and he served as a percussionist in the United States Air Force Band of Flight at Wright Patterson Base from 1999 to 2008. As a musician, he was used to the focus it took to master the drums but enlisting with the armed forces only served to give him a deeper sense of dedication.

“I already learned a lot about discipline through music, but then to have the military training. Not only was that a different level of discipline, but it trained me to be a good administrator,” he said.

“It trained me to be a better connector of communities and people and be a lot more organized…It was excellent training ground.”

As a member of the Band of Flight, he performed over 1,500 concerts throughout the Midwest, including performances for presidents, vice presidents, senators, foreign dignitaries, and other heads of state.

Noble said the mission of the band was three-fold: to perform ceremonial services, conduct community outreach and recruitment and boost troop morale.

Still, at times he found it difficult to liken his service to that of soldiers who fought in the thick of war.

“I’ll run into veterans from time to time wearing Vietnam service attire who have served in combat and I’ll thank them for their service,” he said.

Noble further explained: “They’ll often respond: ‘Did you serve too?’ and I say: ‘Oh, just an Air Force band.’”

But without fail, they reply: ‘That counts. Thank you for serving.’”

For Noble, it’s humbling. But that’s the way it is. Veterans immediately understand they all share a common mission.

Today, he’s the director of percussion in the School of Fine and Performing Arts at Wright State University. He’s also a member of the Dayton Philharmonic Orchestra and an adjunct faculty member at Cedarville University. Even more, his numerous credits extend to music festivals, performing with many orchestras including Cincinnati Symphony, Louisiana Philharmonic, Indianapolis Chamber Orchestra and playing in his own jazz/pop band Moment’s Notice.

“While I play a lot of concerts regularly, my passion is instructing a diverse lot of students and guiding them in their next step in life and career.”

He looks back on his time in the military fondly, so much so that he encourages young students to consider careers in military band service. Many have taken his advice.

Some of his current and former students are playing in the likes of the US Army Old Guard Fife and Drum Corps, in Washington DC, the United States "Pershing’s Own" Band, also in DC; USAF Bands, US Navy Bands, and US Army Bands.

Noble credits his time at Cleveland State studying with Tom Freer (recently retired from the Cleveland Orchestra) as an integral part of his success.

“Studying with Tom really prepared all of us so well for our careers,” he said.

You can find out more about Jerry at www.NoblePercussion.com and his faculty page at Wright State .

In addition to Noble, other alumni are currently serving in military bands.

Dorian Neuendorf (BM ’13) is a second lieutenant and flight commander and associate conductor of the US Air Force Band of Mid-America on the Scott Air Force Base in Illinois. Michael Warnick (BM ’01, MM ’03) has been a trumpet and cornet player in the “The President’s Own” US Marine Band since 2005. And Jared Dubber (BM ’22) recently became a member of a US Air Force Band.