Leading the charge in medical innovation 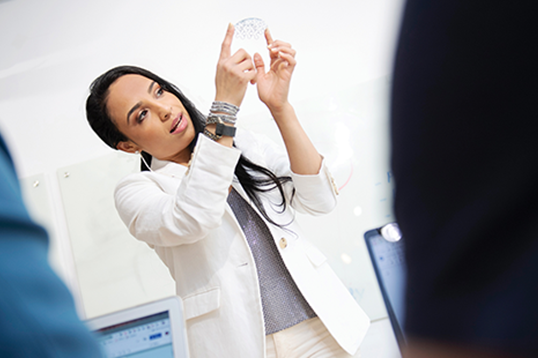 Accomplished alumna Dr. Ediuska Laurens is using the powers of science and engineering and her know-how of industry to improve the health of vulnerable populations.

This story was originally published in the Washkewicz College of Engineering Magazine and has been edited for length.

Dr. Ediuska Laurens, who earned a doctoral degree in Applied Biomedical Engineering in 2009 from a joint doctoral program of the College of Engineering of Cleveland State University and the Cleveland Clinic, invented a device to help infants who are born with jaws too small to function properly.

“In plain English, we were making implants that are used to repair babies’ heads,” she says.

It’s called a pediatric mandibular distractor. At the time, she was leading a global research and development team at Stryker Corporation, a giant medical technology company, “and pretty much taking products from concept to global commercialization,” she says.

That means navigating the approval process of the U.S. Food and Drug Administration, which might sound like a chore. For Dr. Laurens, it was an adventure.

“During product development, we had an explosion in one of our plants in Germany,” she says. “When we were trying to do FDA approval, the U.S. government shut down. When we finally got clearance, we had to accelerate product launch, because there was already a surgery booked, so we needed to expedite everything. There’s a baby that needs this.”

She emerged with a keen understanding of what the approval process does to ensure the quality of a new product, and also of the advantages she had because she was learning the process at a Fortune 500 company. That led her to form Genius Shield, which helps smaller companies navigate the system.

The company website, geniusshield.io, identifies Dr. Laurens as the “Head Fanatic” and explains the mission as “We geek-out on safer products and successful launches.”

Dr. Laurens says a friend told her, “I’ve never met anybody as passionate about regulation as you.”

“I’m actually passionate about protecting patients,” she shares. “I truly believe that we have an opportunity to raise the quality standards in the market. So we can reduce, if possible completely eliminate, any type of recalls that are affecting your mother, your father.”

Dr. Laurens’ own parents were the target of her first big sales pitch. When she was an 8-year-old girl in Venezuela, she told them she wanted to move to the United States to build satellites.

She came to the U.S. at age 16, shortly after graduating from high school. “That was the deal that I made with my parents. I was valedictorian at my school, so I was showing my parents that I meant business.”

Years later, she was finishing a master’s in mechanical engineering at SUNY Buffalo. Her mentor there, Dr. Robert Baier, suggested she consider a biomedical engineering doctoral program run in partnership by CSU and the Cleveland Clinic.

Using tickets to a Maroon 5 concert as bait, she persuaded a friend to drive her to Cleveland to check it out.

“The program is set up in a way where you spend the first year between Cleveland State University and Cleveland Clinic,” Dr. Laurens says. “You take the courses at the University and you do the research at the Cleveland Clinic. I think this partnership is so brilliant, and it offers such a robust ecosystem that I was very fortunate to be part of it and have the best of both worlds. I had so many incredible opportunities, including being elected as the student representative of the International Society of Biomechanics.”

In March 2020, Dr. Laurens came back to Cleveland to accept a Women in STEM award at a CSU Women’s History Month event. The award, she says, “felt like a confirmation from the universe that I am in the right path with what I consider to be my mission. I truly believe that we live in a very exciting era for women, where women, and especially women in science and engineering, will play a crucial role in democratizing health care globally, because it is a human right.”