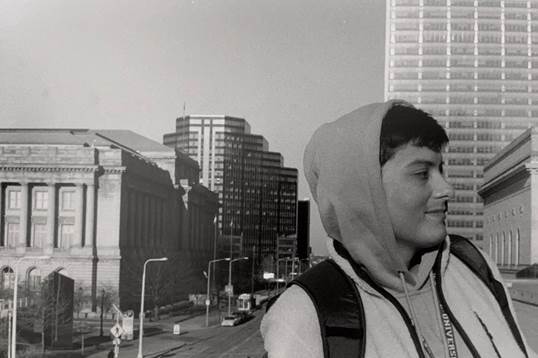 Native Chicagoan Jesse Prado was finishing his first semester at CSU, settling in to campus life, making new friends and carving his place in Cleveland, when everything changed.

Life, it seems, was making sense for Jesse Prado, 20. And then it didn’t.

After a semester at University of Illinois at Chicago a couple years ago, he took a break and spent two semesters at community college near his hometown in Gurnee, Illinois, to figure out what he wanted to do for the rest of his life.

When his girlfriend was accepted at Case Western Reserve University, he came along with her to visit and liked the city enough to apply to Cleveland State University.

He arrived on campus in January for his first semester.

A little over two months later, he’d be back home in Gurnee, riding out a global pandemic, biding his time until he could return to campus.

“The timing couldn’t have been worse,” he said.

Though he agrees with the administration decision to shift to remote learning, he still admits it stung.

“I felt like, going into the school year, I’d built up a lot of momentum,” he said.

“My courses were going great. I liked my professors.”

And then just two weeks before spring break, he found the brothers at Sigma Phi Epsilon.

Though he’d been recruited by another fraternity, he wasn’t sure if Greek life for suited for him. But when he connected with SigEp, he quickly identified with the group.

He received his official bid to join during spring break.

On top of that he’d also landed two paid internships, one at a local digital marketing firm, the other with a soccer club.

“Things were going so well,” he said.

He’s carrying a course load with five classes and says now that CSU has shifted to remote learning, his biggest challenge is time management.

Still, he describes the experience as tenable, hoping for better days when life can get back to normal.

And despite some of his Generation Z counterparts, defying orders to isolate, he’s staying put.

“If we all abide by the quarantine, it would last a lot shorter.”