'We never would have graduated without each other' 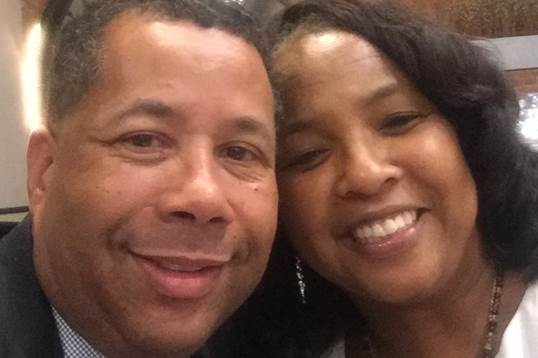 'We never would have graduated without each other' February 13, 2017

In honor of Valentine's Day, we're celebrating Viking love. Trina and Gerald Carrier, this year's winners of our Vowed Viking contest, found each other on campus, drifted apart, but eventually reconnected, renewing their resolve to finish school and build a life together.

The first day of class: January 1985.  I had a jazz survey class in one of the big halls at CSU. The class was full and there was only one empty seat next to me all the way at the top. I saw Gerald when he came in, but his friend sat next to me. The next day Gerald came early and sat next to me. We became instant friends and passed notes every day during class.

The Shire, Fat Glenn's, University Center 3rd floor, Rascal House, the library, Mather Mansion and more were our hangouts. We dated for 3 months, but then broke up because I wasn't ready to be serious. Gerald said I put him in the "friend zone.”

We stayed best friends for 7 years, talking on the phone, going to an occasional matinee movie or bumping into each other at various social occasions.  He always made me laugh.

Finally in 1992, we reconnected after our failed marriages to other people. We both decided it was time to finish our degrees at CSU together. I was an associate degree RN who worked nights. I would sleep on the couches in the Green Room and Gerald would page me to wake up and go to class. We remember going to class in sub-zero temperatures, the endless circling of the campus for a parking spot and the quarterly task of scheduling the right classes to graduate.

In January 1993, we decided to officially date again. We have been together ever since. Everyone says we were meant for each other.  I graduated in 1994 with a BA in communication and Gerald in 1995 with a BA in business management/labor relations.

Sometimes we feel that we never would have graduated without each other. We married in 1996 and have 3 biological children and have fostered 12 others.  We still reminisce about our first meeting in Jazz Survey. I wish I still had those notebooks.

Everyone who knows us knows our story about meeting at CSU. It has been a great ride, raising a family, traveling and growing up together the last 32 years and we are looking forward to many more.